Samsung has announced another line of smartphone in the market, the Samsung Galaxy Alpha. This Samsung Galaxy Alpha was designed to compete with the Apple iPhone 6 because of its exquisite look and feel. This smartphone comes equipped with  Exynos 5 Octa 5430 chipset which has quad-core 1.8GHz Cortex A15 and quad-core Cortex A7 processor. It has also Mali-T628 MP6 graphics processing unit. With this processing power, this smartphone is really capable of multitasking. Aside from being beautiful and powerful insides, it will be having a fingerprint sensor which is said to be PAYPAL certified. 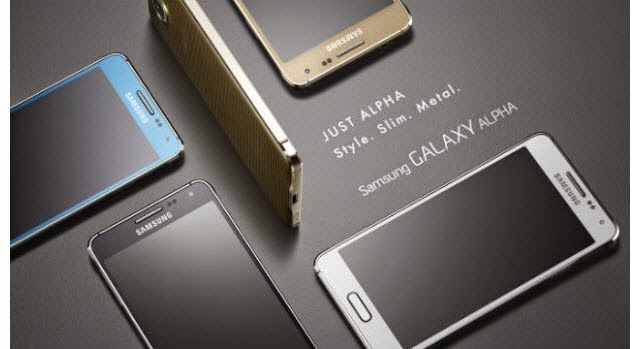 Regarding the screen of this new smartphone, Samsung Galaxy Alpha, it will be packed with a screen size which is about 4.7 inches, measured diagonally, with a resolution of 720 x 1280 and a pixel density of 312 PPI.  The display is a SUPERAMOLED capacitive touchscreen consisting of 16 million colors. It also has 32GB storage capacity and a memory (RAM) of up to 2GB.

Moreover, this Samsung Galaxy Alpha comes packed with camera features such as main camera which can capture up to 12 MP with up to 4128 x 3096 resolution with autofocus technology,  LED flash, geo-tagging, touch focus, face and smile detection, panorama, and HDR. While the front facing camera can capture up to 2.1MP. On the other hand, the main shooter can capture video materials at 2160p@30fps, 1080p@60fps and 720p@120fps.

This lovely smartphone, Samsung Galaxy Alpha, measures 5.21 inches x 2.58 inches x 0.26 inch and weighs about 115g. It comes with 1860mAh battery which everybody would think that it is low compared to those standards in the market today. But this is yet to be tested if it could easily make it through the day of heavy usage.

Regarding Operating system, this Samsung Galaxy Alpha runs with the most popular operating system in the planet, the Android operating System, Android OS, v4.4.4 (KitKat). It might debut in the market at price of about 600EURO this September 2014.