Microsoft is now serious in promoting their mobile OS in the market by making their license available to OEM at a low price. With this, Cherry Mobile Alpha Style will be available in the Philippine market later this month. The Cherry Mobile Alpha Style comes equipped with Qualcomm Snapdragon 200 (MSM8212) quad - core processor which runs at the clock speed of 1.2 GHz. It has an integrated graphics controller called Adreno 302 GPU which is capable enough to play most games with ease.


Under camera department, this Cherry Mobile Alpha Style features 5 - megapixel main camera with LED flash and 0.3 - megapixel (VGA) front camera. Moreover, it is also packed with dual SIM, 3G connectivity, and Bluetooth. It also has 4 GB internal storage which is considered very limited most specially to those who like to download applications and games. But, using the built-in microSD slot the storage capacity can be expanded up to 32GB. On the other hand, this Windows Phone from Cherry Mobile comes with 512 MB RAM which might be a problem for those who would like to play games with this device. 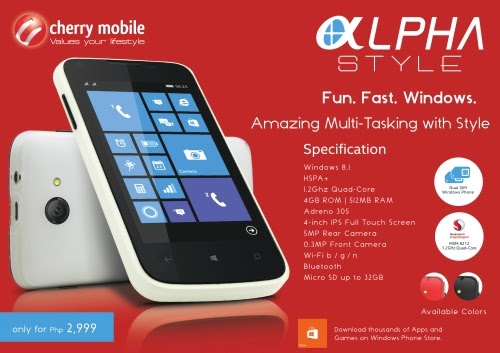 This smartphone is equipped with 4 - inch WVGA IPS LCD display with 800 × 480 screen resolution which makes it to have 233 pixel per inch. The PPI is considered low which would result in display which is not that crisp and sharp. This smartphone is powered by Windows Phone Operating System v 8.1. Since it is powered by Windows phone 8.1, it is expected that Cortana will be available in this device. This smartphone measures about 126 mm x 66 mm x 12 mm and weighs approximately about 130 grams with 1500 mAH battery. This device can be had at the price of Php 2999.