Another AMD powered Accelerated Processing Unit is now available in the market, the AMD A8-6410. This mobile processor is a quad core SoC designed for entry level devices and subnotebooks. The quad core processor has a clock speed of 2.0 GHz up to 2.4 GHz. It is fabricated using the 28 nanometer technology with an integrated GPU called Radeon R5, a single channel DDR3L-1866 memory controller and the Southbridge with various I / O ports. 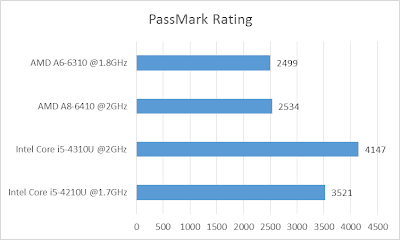 With this current technology, AMD has achieved to decrease the leakage current, thereby permitting considerably higher clock speeds. This results to a more reactive system and of course better overall performance. Just like its ancestor, the AMD A8-6410 chip is manufactured in 28 nanometer technology.

Regarding its performance, in single thread task, the AMD A8-6410 will perform better than the former AMD A6-5200 with TDP of 25 Watts and clock speed of 2.0 GHz, but just somewhat ahead when compared to multi thread levels. Generally, this Accelerated Processing Unit offers a performance which is somewhat similar to a Haswell based Pentium or Core i3 (ULV). Nevertheless, the AMD A8-6410 APU will be enough for all daily jobs like Office, Internet browsing and multimedia. This APU is less powerful than Intel Core i5-4210U with a Passmark score of 3521 and Intel Core i5-4310U with a score of 4147 points.

As regards to graphics power, this AMD A8-6410, with Radeon R5 GPU, offers 128 shaders, which is based on the GCN architecture and has a clock speed of up to 800 MHz. In comparison, the graphics performance of this integrated GPU is quite similar to Intel's HD Graphics 4200.

The thermal design power (TDP) of this AMD A8-6410 APU is 15 watts. Therefore, the APU is designed to be used for smaller Laptop PCs. Moreover, this APU has 256 kB level 1 cache and 2 MB level 2 cache.