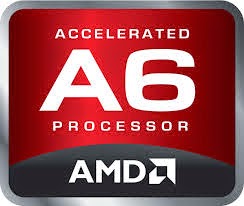 The AMD A6-6310 is another accelerated processor with 4 CPU cores which are clocked at 1.8 GHz, but because of Turbo Core technology it can increase the processing speed up to 2.4 GHz. This Accelerated Processor  is fabricated using the 28 nanometer technology which includes the Radeon R4 GPU, single-channel DDR3L-1866 memory controller and Southbridge chipset with several Input / Output ports.


With the new architecture, AMD has succeeded to decrease the leakage current which permits considerably increase clock speeds. This is equivalent to a more responsive system and improved overall performance. This processor, on the other hand, has level 1 cache of 256 kB and level 2 cache of 2048 kB.


Compared to other processors, this AMD A6-6310 accelerated processor to some extent outclasses the older AMD A6-5200 APU with 2.0 GHz clock speed in single thread tasks. Overall, the A6-6310 is expected to perform with ease on most daily computing needs such Office documents like word processing and spreadsheet, Internet browsing and multimedia applications. Below is the PassMark Score of A6-6310 APU compared to other processors like Intel Core i5-4210U with PassMark score of 3521 points, AMD A8-6410 APU with PassMark score of 2534 points, Intel Core i3-3217U with a score of 2299 and Intel Core i5-4210u with a Passmark rating of 3521 points. 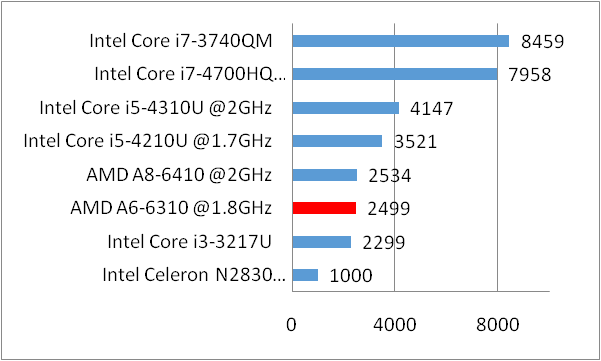 In the chip, the Radeon R4 graphics processing unit is integrated that features 128 shaders, which is clocked to 800 MHz. In comparison, its performance is similar to Intel HD Graphics 4200. Only a few games are playable with this using low settings, but older and less demanding games will run flawlessly with this graphics processor.

Moreover, this processor has a thermal design power (TDP) of 15 watts. Thereby, this accelerated processor is designed primarily for smaller laptop PCs ranging from 11 inches and above.