Those who wanted to get a smartphone packed with the latest Android version without hurting their budget, Starmobile has something to offer for you, the Starmobile Vida. This smartphone is packed with MediaTek MT6572 dual-core processor which runs at the speed of 1GHz. Those that are tech savvy would not mind buying this phone because of the CPU, dual-core and 1GHz? Well what would you expect to a smartphone with priced that low? This smartphone is intended to those who would like to have one, as I have said, with low budget for devices.

Moreover, this Starmobile Vida is equipped with 3.5-inch capacitive multi-touch screen with a resolution of 320 × 480 HVGA, that makes a total of  ~165 pixel per inch, so it is expected that the display is not that sharp and crisp compared to other smartphones with monster resolution. It’s GPU is powered by Mali-400MP, which is quite enough to play non-demanding android games from PlayStore.

Speaking of multitasking ability of this Stamobile Vida, this is equipped with 512MB RAM, expect that the interface itself is quite laggy, more so when playing games and using applications. Having 4GB internal memory is common to entry level smartphones nowadays, but this storage capacity limitation is given justice by the company for having an external micro SD card that can read up to 32GB of memory capacity. 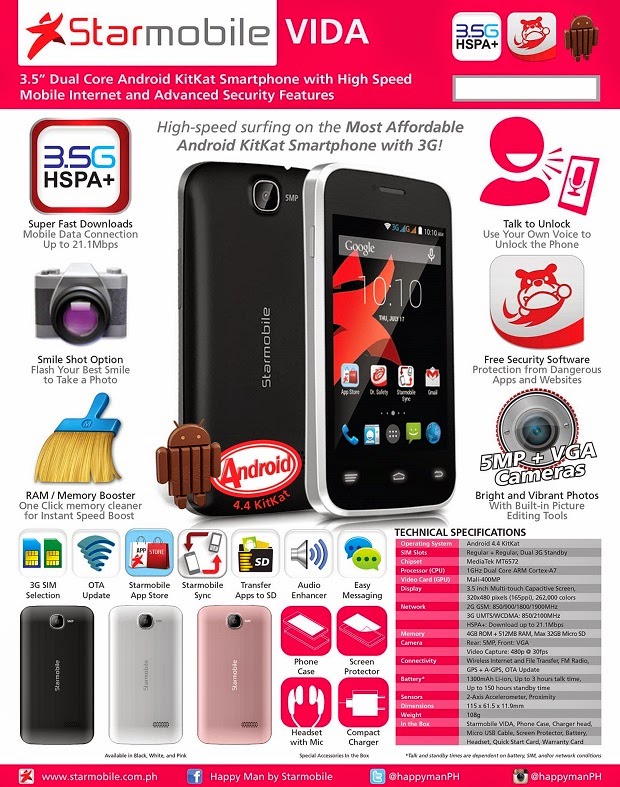 With regards to shooting capability, the Starmobile Vida 5-megapixel main camera, without LED flash and 0.3-megapixel, VGA, front camera which is not intended to those who like to have selfie most of the time.

You can have this Starmobile Vida for just Php2,490, which comes in three colors: black, white, and pink. The package includes free headset with mic, case and screen protector.